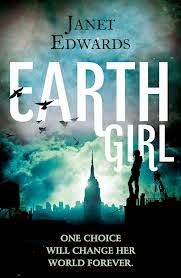 
2788. Only the handicapped live on Earth. While everyone else portals between worlds, 18-year-old Jarra is among the one in a thousand people born with an immune system that cannot survive on other planets. Sent to Earth at birth to save her life, she has been abandoned by her parents. She can't travel to other worlds, but she can watch their vids, and she knows all the jokes they make. She's and 'ape', a 'throwback', but this is one ape girl who won't give in.

Earth Girl is a book about a girl, Jarra, who in the year 2788 is disabled. But not the way we'd usually associate being disabled with; she can walk, she can talk, she doesn't need the use of a wheelchair or crutches. No, Jarra is disabled in the sense that she can't portal to other planets - as with all apes her immune system can't survive being on other planets.

A large part of Earth Girl shows us how prejudiced people can be to others who are 'different'. Even after a couple of centuries people still find a reason to tease and torment others, who are the same as them, skin and bone and a few added extras. Portaling in the book is pretty much an everyday activity, as normal as taking the bus, and to not be able to do that is bad enough - to be called an 'ape' for it, is even worse. To even insinuate that because one's immune system isn't strong enough makes them inferior to everyone else. Personally, I don't know anyone with disabilities well, but from one human to another, I respect people who have disabilities and everything they have to go through to accommodate themselves.

I love how this theme of prejudice is explored throughout the book, especially since for the most part a lot of the characters Jarra interacts with don't know she's an 'ape' - and how its not just directed at Jarra but the 'norms' already have presumptions about each other according to what sectors they're from, and how they'd act, and getting to see some of the back-handed characters grow to overcome the initial assumptions was something that really added to the book, in my mind.


"I'm Handicapped and I always will be. I can't join the Military, but I've got history and Fian, and I think they're the most important."

Another big part of the book was the world building, which was just honestly amazing. I realize the fact that there are some bits that don't add up in real life, because it is an alternative world, it isn't completely fictional - but even with these slight misses, I still thought it was well executed. There's only so much you can fit into a book without it sounding like historical waffle.


From the sectors, to the norms and portals - being someone who was interested in Archaeology and still is, I think its fair to say I was a bit quick to judge how Edwards presented this subject in the future, and needless to say she did a bloody good job. Nothing was over complicated, but there was still lots of details and without that I think the book would have felt severely lacking. And again, all the scientific elements to the book were well explained and/or accurate - I'm not keen on sci-fi novels in general, though I've read quite a few, but Earth Girl is a book that's gotten me excited to read more from this genre, but its also got me excited for the future - if someone can come up with this in fiction, who's to say it won't be possible in the next couple of centuries??

I thought the romance that transpired between Jarra and Fian was very sweet, but un-necessary; I felt that the book would have been just as good without the romance, or to have had it developed more than it was. Another thing I think that could have been developed a bit more was the 'Twoing' contracts, which Jarra and Fian get - I didn't really understand the point of it at times, then marriage is something completely different. I have to say, I loved the main character. Usually, I have a large disliking for female protagonsists (not on purpose!) but I love Jarra, and the fact that we get to know her properly as a character even when her identity changes to JMK (Jarra the Military Kid) not a lot about her has changed apart from her background and so on so that the other 'norms' wouldn't know she's an 'ape'.

Earth Girl surprised me being such a good debut novel, but it really was. The world Edwards created was brilliant, the characters aren't easily forgotten, and neither is the message of prejudice. In short, Earth Girl is an altogether stunning debut novel, with very few flaws. If you like Dystopia/Sci-Fi with a tad of romance then Earth Girl is for you, I promise you'll love me for recommending this ;)


Rating: 4/5 Bookish Birds; I like this book a lot, I would read it again, and recommend it, but it hasn't been the best book I've read.

Hello, lovely readers! I value every single comment I get, and try to reply to every one. But if your comments are mean, vulgar, or have nothing to do with the blog they will not be approved.

We're two book loving teenagers who talk about books, review them, and fangirl a lot. I'm Fionnuala, and I ran Books for Birds for eleven months before Zoe became my co-blogger.

Sit yourself down with a cuppa tea, you'll be right at home.